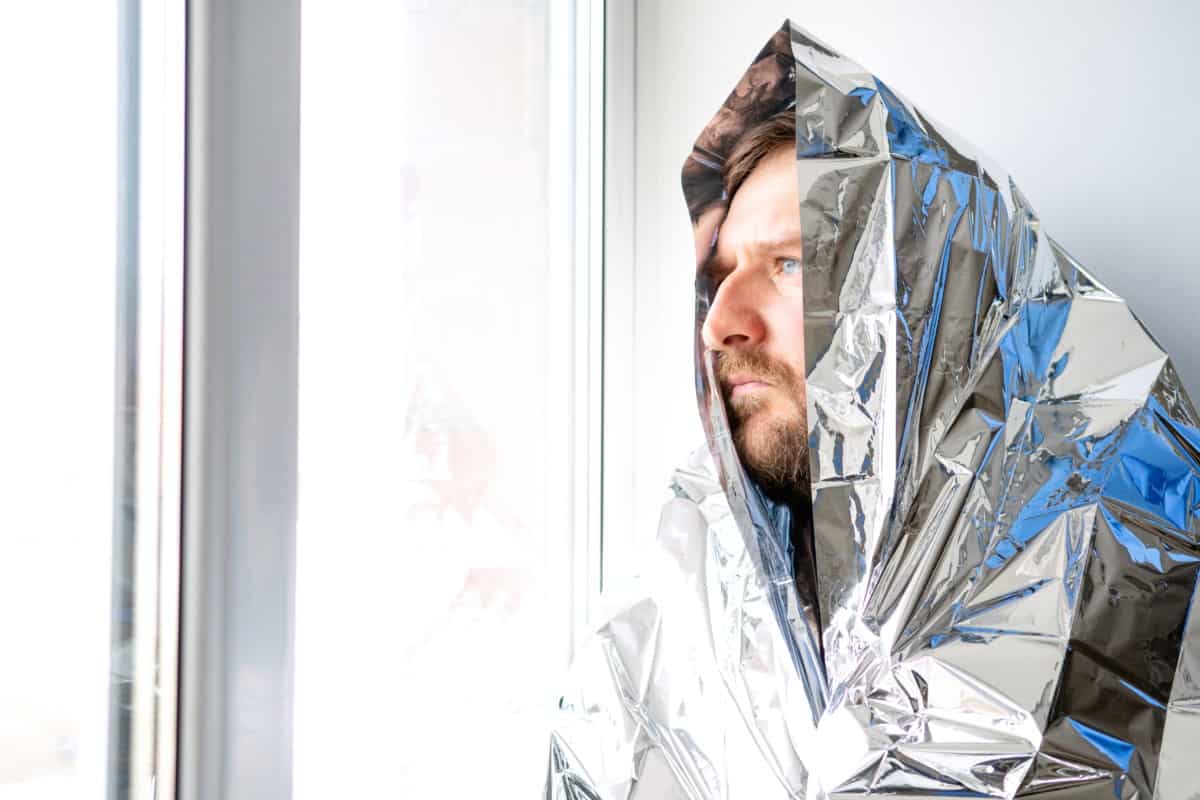 Emergency blankets are one of the most underrated technologies of the century. Originally inspired by tinsel that’s made for toys and Christmas trees, the thin, shiny metallic material serves an unending multitude of purposes from marathon running to space stations. It’s incredible how versatile emergency blankets can really be.

So, why are emergency blankets silver and shiny? The thermodynamics of the material makes it functional. It can both reflect and deflect heat, similarly to how we use tin foil in the oven. Not only does this material keep heat in, but it also keeps unwanted heat out, which helps even with tactical military endeavors!

How the Silver and Shiny Aspects Work

Commonly referred to as space blankets, emergency blankets are made from metalized plastic sheets. This material is called mylar. They were originally intended to keep a space station called Skylab from overheating due to technical difficulties; the space blankets effectively deflected the heat from the sun, preventing the spacecraft from overheating.

From this point, NASA found many other uses for the material. Today, it is commonly used as emergency equipment, which can help to prevent shock in trauma situations. The blankets can keep in around 90% of a person’s body heat and prevent it from escaping, which is both soothing and sometimes very necessary, depending on the situation.

The material also helps to keep heat out. Staying under an emergency blanket in the desert will deflect heat and harmful UV rays that would normally penetrate most fabrics. The reason mylar is so shiny is to act as a thermodynamic regulator or something that can act as a sort of heat shield.

Why Emergency Blankets Are Important

There are tons of reasons why emergency blankets are so important. Take marathon runners, for example. Runners work up so much body heat during their intense runs that once they stop moving, their body heat diminishes too rapidly to be safe and can cause the runner to go into shock. They use mylar blankets to slow this process down and avoid dangerous situations.

Another important use of emergency blankets is, of course, survival in emergency situations as the name implies. A hiker caught in a storm might get lost; in this event, the hiker has some source of warmth and protection until they are able to be rescued. This situation matches any outdoor activities that might include being out in remote regions.

There is also a myriad of other uses that stray away from their intended warming and cooling purposes. Mylar has applications in lots of industries. Not only can it be used for its thermal properties, but also for its silver lining.

It has been known for many years that military equipment is becoming incredibly advanced. One example of this fact is that the military can now use thermal detection to find camps and individuals.

Mylar offers some protection from this technology. It can act as a sort of shield that helps prevent the location of someone underneath it or otherwise surrounded by it, whether used in uniforms or as a shade. The mylar simply reflects the heat from its surroundings and in the same way reflects a person’s heat back down to them instead of up, as heat usually does.

If you’re caught in a region where being rescued is closer to the top of the list of priorities than staying warm, emergency blankets can be extremely useful. Rescuers are more likely to notice a large, shiny, moving object than a small mirror or other reflective objects. This can be done in many different ways.

Emergency blankets can be made into flags at the top of a tall pole or tree, waved around at the sound of help nearby, or even just propped up visibly near your campsite. It can also be worn to attract the attention of rescuers and possibly even passing planes!

As previously mentioned, mylar has made its mark at NASA and in other space technology programs. It is still a very popular choice in the design of space suits and other heat-sensitive space equipment! Emergency blankets are layered into these suits to help protect astronauts from subspace temperatures and micrometeoroids.

Emergency blankets are used in the most prestigious fields of medicine. Their most popular use in the medical field is during surgery when it is imperative that the body stays warm enough to prevent the shivering that anesthesia sometimes induces. This shivering makes it especially difficult to work with precision in order to avoid complications.

This interesting counteractive application is still used to this day in operating rooms and will likely remain the primary source of heating for patients undergoing surgeries. Now that scientists are working on microscopic surgical robots, however, this necessity may fade over time and adaptation to an ever-changing technological industry.

As if emergency blankets weren’t already the most versatile material in all of technology, there is yet another necessary use in engineering, particularly in buildings such as houses, apartments, and office buildings. Most building projects fit mylar in somewhere- but it serves its purpose.

Mylar makes excellent insulation. Much of the Styrofoam insulation you see in home improvement stores today is coated on one side with mylar to help keep the temperature inside a building regulated. This is part of what makes it possible to regulate temperatures in very tall buildings, such as skyscrapers.

The Material Behind Many Technological Advancements

Emergency blankets serve a multitude of purposes, but mylar was only first discovered to be such a useful material in 1952. Since that first bloom in popularity, mylar has become the gold standard for a myriad of important advancements. Not only is it capable of preventing sock in humans, but it also protects our space equipment.

Without being particularly fun like putty, magnetic rocks or baking soda and vinegar, mylar has made its way into the daypacks and cars of many, many people worldwide. Being one of the most versatile materials on the market, mylar can be found in an unusual and somewhat unbelievable amount of different industries.

From its first use as a coating for toys and decoration for Christmas trees, mylar has sure come a long way. Invaluable to NASA, the military, engineers, and even surgeons, it is surprisingly inexpensive and easy to get. It is bought online, in supermarkets with first aid items, and outdoor sporting goods stores.

If you plan on heading out on a trip or adventure any time soon, make sure to grab this silver, shiny rectangle and keep it with you. You really never know when you’ll need it. Remember that mylar can break down over time, so be sure to replace your cache of emergency blankets every couple of years or so. You won’t regret it!